15 Mar Producers, Strapped for Cash? What are your options?

Posted at 14:10h in Liz Out Loud by LizOutLoud
0 Likes

I have spent a lot of time recently with oil producers who, with some notable exceptions, are very gloomy indeed.

Anyone who reads my blogs or books knows that I have never forecast oil prices and I don’t intend to start now. The oil price is fundamentally unforecastable, prone as it is to political shocks and unforeseen events.  Instead I prefer to consider trading opportunities as they arise and deal with life as it is, not as I would like it to be.

The current reality is low oil prices and a market in contango (See Chart 1).  Producers who spent last year slashing costs and have little fat left in the system may wish to consider selling options. This needs some further explanation because it is not a strategy that is suitable for every company and it requires a good deal of in-house analysis before entering the market. 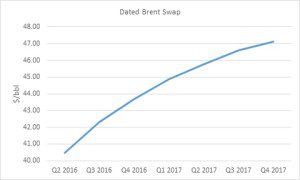 Ordinarily I would expect to be advising producers to consider buying put options to protect them against further falls in the oil price, not selling them. But the response I get from many producers at the moment when I suggest spending money to buy oil price protection is hollow laughter.

For those companies that have cash and want to go on hedging against further falls, Table 1 shows some indicative quotes of what it would cost currently to buy put options that have a strike price that is $5/bbl out-of-the-money (“OTM”) and $10/bbl OTM. [Anyone who needs a quick refresher on how swaps and options work will find one in Chapter Six of “Trading Crude Oil: the Consilience Guide”. See here.]

Companies who baulk at shelling out cash to buy price insurance in the form of options often finance the purchase of the options that they need for hedging purposes by selling other options. Commonly, a cash constrained producer that is risk averse may sell call options to finance the purchase of the puts it needs for hedging purposes. The price of call options that are $5/bbl and $10/bbl OTM are shown in Table 2.

Alternatively the producer might finance the purchase of puts by also selling puts, but at different strike price levels. For example, a producer who wants to protect itself against prices below $38.70/bbl in Q4 2016, but who does not believe prices will again fall below $34/bbl, might sell 172 x $33.70/bbl put options for every 100 x $38.70/bbl put options it purchases.

This is not an approach for the faint-hearted because if the producer has called the market wrong, it may find itself being forced to buy oil at $33.70/bbl in a falling market

Any company suffering a cash flow crisis in this price environment may wish to consider simply selling options to raise cash. For example a producer facing an average 2017 swap price of $46.10/bbl may prefer to sell call options at an average strike price of $56.10/bbl and receive an upfront premium of $3.15/bbl.

Before going anywhere near the market there are some questions that producers need to ask themselves. If the company is being encouraged by a derivative provider to start dealing, that providershould also be asking the producing company these questions.

First, what is the producer’s risk profile? This is individual to each company. A good starting point in evaluating a company’s actual price risk is to establish what happens to its assets or its company if the price changes by $5, $10 or $20+/bbl up or down.  Most companies don’t have an exactly linear risk profile and there may be step changes up or down as assets start up or shut down or as fields reach payback and become subject to different marginal tax rates.

The risk profile is easier to assess for producers with production currently on-stream, but that still doesn’t make it easy. A lot depends on the company’s joint venture partners and their attitude to shutting in production if revenue falls below costs. It also depends on any term sales or other contracts to which the producer has committed.

Producers with assets already in production may contemplate selling options on future production to generate upfront premium to be paid now to relieve cash flow pressure.

Producers with assets in development might also be able to explore this avenue of cash generation, but they have to be very sure of when the asset will come on-stream and at what production level in order to construct an appropriate cash generation package.

I can recommend a good therapist to any company seeking to raise cash for exploration purposes by selling options, in isolation from any other production activity. This tool is not for you.

This is because derivative instruments typically pay out or don’t pay out depending on what happens to the oil price. Pay-out happens irrespective of whether the physical asset or field that the financial position is designed to hedge produces or not. For a producer a death-dealing double whammy would be for the price to shoot up, but for the asset to suffer an operational failure to produce. In that case if the producer had sold puts to raise upfront cash, it would be forced to buy oil at a strike price at above current market levels without being able to sell the production from the asset to offset the financial loss.

Secondly, what is the producer’s risk appetite? There are as many answers to this question as there are producing companies to answer it. Oil producing companies are some of the biggest risk takers out there who will spend millions of dollars on a single well happily, but who regard any form of market activity, other than disposing of any oil they find, as a too risky to contemplate.

Remember this old chestnut? “We cannot hedge against a fall in the oil price because that is expressing a price view. That is not an exploration and production company’s expertise nor is it what our shareholders want from us.” Such companies have been disappearing faster than characters in an Agatha Christie murder mystery.

A company can only enter into hedges if its memorandum and articles of association allow it to do so. Even if hedging is permitted, the company does not want to take its shareholders by surprise by entering into hedges that external observers at some later date may be able to characterise as speculative.

This gets us into a very grey area of when is a hedge not a hedge, but is in fact speculation? As an expert witness I wish I had a pound for every time I have encountered that question in audit committees or in courts or arbitrations. The area is grey because, in my opinion, the same action can either be a hedge or can be speculative depending on the circumstances and the intentions of the company doing the deal.

A producing company that sells swaps or buys put options can demonstrate relatively easily that it was hedging the production stream from an asset when it did the deal. But what if the production asset shuts down or, worse, fails to start up? Is it still a hedge or is it now a speculative position?

What about a producing company that buys put options, but finances the purchase by selling call options, i.e. a collar? If buying a put option is akin to taking out an all risks insurance policy, then financing the purchase of the put by selling calls may be characterised as a buying cover for only “third party, fire and theft”. In other words there is a qualification on the type of cover purchased.

How about the producer that sells calls without buying puts? Some would say that this is obviously speculative because writing options is a price risk increasing exercise. However, arguably, such an action may be considered to be hedging the company’s cash flow, rather than hedging its price risk.

If the price falls it will have to sell its production at a lower price, but its cash flow has been boosted by the call option income for calls that are not exercised. If the price rises it will be obliged to sell at the higher strike price of the call, but if it would have sold at that level anyway if it had had the opportunity to do so when it sold the calls, where is a the problem? And in the meantime its cash flow has again been boosted by the upfront call option income.

If you are a producing company that worries about low prices, how low do you think they can go in reality? To zero? Clearly not. $10/bbl? Maybe, but unlikely. $20/bbl? Still a maybe, but a bit less unlikely.

The question is why would you hedge all of the downside below, say, $45/bbl down to $0.00/bbl, if you think that $0.00/bbl cannot happen? You may decide to sell some swaps for 2017 at an average price of $46.10/bbl. At the same time sell some puts at $20/bbl because you do not believe that prices will fall that far and the upfront cash is handy for paying todays bills.

Even if a company believes it has no market price view, but wants to hedge just in case the worst happens, it will still have to take a view on the price level at which to enter the market to hedge. Today’s price? Tomorrow’s price? At $45/bbl or $40/bbl?

All the esoteric option packages that are sold by derivative providers are just combinations of puts and calls at different strike prices, different maturity dates or different volumes. Tailoring a package to suit a company’s risk profile, risk appetite and market price view can be a lengthy and painstaking process. If a derivative provider is prepared to skip over this process and goes straight to pushing a particular package on a company, then warning bells should start to ring.

It would be unwise for any company to enter the market without first analysing its risk profile, risk appetite and market price view. It is essential that any trading action taken is permitted by the memorandum and articles of association of the company and that the board has issued clear delegated authorities to act to qualified personnel.  It’s a good idea to let the shareholders know what you are up to, because they do not like surprises.