The Regulation of Commodity Markets: Part One

The Regulation of Commodity Markets: Part One

The meltdown witnessed in 2007/2008 did not start in the commodity markets. But the commoditisation of oil, gas and power by the increased use of derivative instruments – forwards, futures, swaps and options – for risk management and project finance means that these commodities have been press-ganged into the fight for a safer financial system.

There are three features to the G20 strategy to secure the financial system:  increased transparency through timely and clear reporting; the enforced migration of opaque over-the-counter (“OTC”) deals onto more transparent regulated exchanges; and, an enhanced obligation to collateralise open positions adequately, re-enforced with a system of margin calls to ensure that no-one is playing “double or quits” with the financial system.

These features aim to ensure that when business is transacted it can be done, and can be seen to be done, in a secure environment. A major consequence of the G20 succeeding in all these goals would be the concentration of risk in a small number of central counterparty (“CCP”) hands for clearing. This could potentially create CCPs that are too big to fail, replacing the risk of banks that are too big to fail.

Cognisant of this fact, the Financial Stability Board (“FSB”), created in April 2009 by the G20, published on August 16th 2016 a discussion note entitled “Essential Aspects of CCP Resolution Planning”. This invites consultation responses by the tight deadline of 18th October 2016. The FSB coordinates the monitoring and reporting of the implementation of the G20’s financial reforms. Under the FSB umbrella standard-setting bodies will be responsible for “monitoring and reporting on national implementation in their respective areas.”

One of several such bodies of particular significance to the commodity market is the International Organisation of Securities Commissions (“IOSCO”). IOSCO presides over a policy committee for the Commodity Derivatives Markets. It is not responsible for physical commodity markets. This is the nub of the problem: the distinction between physicals and their derivatives contains many grey areas in the commodity market that do not occur in the financial markets. Yet commodity markets were intended to receive the same regulatory treatment as financial markets. As time goes on and the new regulatory instruments are being translated from broad statements of policy into detailed procedures manuals, the inextricable link between commodity derivatives and the underlying cash commodities that can either be settled in cash or by physical delivery, requires increasing customization of the Regulations to fit the commodity model.

One of the first stages of new regulation is to collect vast quantities of increasingly granular data. There is intended to be a lot of “monitoring and reporting” going on within the new regulatory framework. But it is less clear who will be “interpreting and acting on” the vast flow of data in time to head off problems before they occur. This is a particular issue for commodities because the interpretation of data requires detailed and specialised understanding of how each branch of each commodity market works. By the time the data is received and comprehended it is likely that whatever problem it was designed to spot and stop will already have happened. The new regulations run the risk of allowing us to conduct an excellent “post-mortem”, but not to prevent the “murder” in the first place.

The list of G20 countries, supposedly all aligned in their regulatory objectives, is so wide-ranging it is unlikely that market players can escape regulatory over-sight by moving to another country. Companies decamping to Singapore and Switzerland may well have different views on the length of the G20’s regulatory arm. Ultimately such financial hubs will be caught in the regulatory net by their need to deal with counterparties that are subject to enhanced financial regulation and consequently cannot deal with entities that do not adopt G20-style commitments. 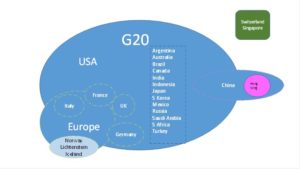 China and Hong Kong make an interesting exception. Despite China’s membership of G20, it would be a brave regulator who tried to sanction Chinese companies for their activities in commodity markets. The Dubai oil market is a case in point. Whether Chinese dominance of this market is deliberately abusive or just an inevitable consequence of the sheer size and number of its transactions is difficult to determine. Nevertheless, China’s presence or absence makes the Dubai market perilous for any oil buyer that links its contract prices to the unregulated Dubai OTC contract, rather than the Dubai Mercantile Exchange’s Oman futures contract. Both the OTC and the regulated instruments are linked to physical Dubai crude oil through their delivery mechanisms. But in the case of the futures contract the regulator has the ability to impose position limits on dominant companies, which cannot happen in the OTC commodity market.