I have tried really hard over the last few months not to be the old bore saying to the young traders: “Call this a price slump? Now 1986, there was a price slump.” But there are some intriguing facets to the current oil price kaleidoscope that are calling out for comment.

The collapse in prices we have seen since September 2014, when we slipped back below the $100/bbl support level that had proved such tough resistance on the way up in 1Q 2008, has more in common with the 1986 price fall than the one we saw in 2009. The fall in 2009 was demand led. Not only do high oil prices choke off demand, but we had engineered for ourselves a pretty comprehensive economic recession that turned the high oil prices in 2008 of around $145/bbl rapidly into a distant memory.

Like the 1986 price war the current low prices are attributable to excess supply. In late ’85-early ‘86 faced with a fall in market share as North Sea and Mexican production built up OPEC made a stand and introduced netback pricing. 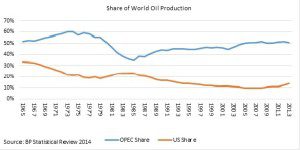 Effectively OPEC guaranteed refiners a profit by selling crude oil to them at a price based on refined product prices with a margin for the refiners built in. The higher the runs, the more money a refiner made so they bought as much OPEC crude as they could. Product stocks built up, product prices fell, netbacks fell and therefore crude prices fell. The downward spiral was rapid and relentless.

As prices fell below $10/bbl, the pips were squeaking in the non-OPEC producing sector, cushioned for the integrated companies by netback profits downstream. But OPEC blinked first as cash drained away and fears of domestic unrest took precedence over market share, they abandoned netbacking and prices recovered.

There are some similarities between 1986 and the current situation, but also some key differences. The Arab Gulf states are facing a build-up in US production, particularly but not exclusively from shale oil. Shale oil is higher-cost, but also very variable-cost, production than conventional production. The fall in prices has encouraged a round of cost-cutting much needed after the years of plenty when prices were $100+/bbl. Every time prices fall producers find that there is fat in the system that can be cut out before embarking seriously on production cuts[1]. This sort of pruning is obscuring the price at which new shale oil production actually shuts in, particularly with a new technology where there is considerable scope for improving efficiency as well as cutting direct costs.

Conventional wisdom is that the shale begins to shut in at around $80/bbl but there are probably a swathe of wells still producing at ~$50/bbl. The drop in the rig count suggests that new well completions are the first to go when the wolf is at the door, but will be the first to come back when prices recover. Hence we are seeing lots of articles saying that US shale production is the new swing producer. That is probably right, but not the end of the story.

This new swing producer is turning out high quality light, low sulphur oil, ill-suited to refining on the US Gulf Coast which is geared up for heavy, high sulphur oil. With a bit of basic distillation of shale oil condensate a shale producer can call its oil a refined product and, hey presto, it can be exported into the international market. Meanwhile conventional crude oil production languishes in the US domestic market at prices that are currently about $8-9/bbl lower, narrowing the revenue gap between conventional oil and shale oil in the US.

Saudi and Kuwait in particular must be pleased to pass on the baton of being swing producers. They are in a much better financial situation today than they were in 1986 to make sure that low prices stay long enough to shut in the high cost producers. After 4-5 years of high prices these countries have quite a war chest of cash to keep domestic politics stable while they are securing their longer term market share. The same cannot be said for some of their OPEC partners, like Venezuela or Nigeria, who have never taken swing responsibility, but are at risk from low prices.

Whether the Russian Federation blows up as a consequence of low prices or whether it gets there all on its own, an interruption to production from the FSU would not see the Gulf States shedding too many tears. Anything that undermines the increasing, but as yet still limited, inter-dependence of Russia and China, the latter still the fastest growing source of demand, would be welcome in a number of producing countries.