Take Your Partners for the Producers’ Two-Step

Take Your Partners for the Producers’ Two-Step

The earlier blog, referred to above, discussed the possibility of producers raising cash by selling options when oil prices are low. This blog addresses the issue that, when oil prices are low and producers are hesitant about locking in low levels, the slope of the forward curve is typically in an attractive contango formation, i.e. forward prices are higher than current prompt prices. Producers like contango because it allows them to sell forward contracts at prices that are higher than the prompt prices that they, and their shareholders, see reported in the press.

Hedging the Slope of the Curve 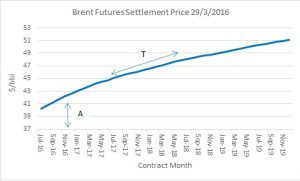 But high prices typically mean that the forward oil curve is in backwardation, i.e. forward prices are lower than the prompt prices that make the producers want to hedge in the first place.  Chart 2 provides an example of high prices with the market in backwardation. 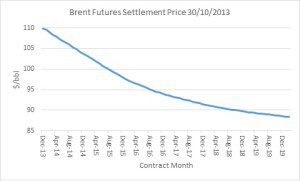 In an ideal world producers want a contango forward oil price curve in a high oil price environment, i.e. the value of the absolute price, A is high and the value of the slope of the forward curve, T, is low, less than $0/bbl. This can and does occur naturally, often just before prices crash because there is too much prompt oil around.

Producers who want to hedge now may judge that the height of the curve is less than ideal, i.e. absolute prices are too low to lock in. Such producers may find that a two-step programme helps achieve the ideal of hedging at high prices in a contango market. Here’s how it would work:

If all goes well for this two-step strategy and prices recover, the producer should generate a profit as the slope of the curve moves from contango to backwardation, i.e. the value rises from <0 to >0. Then when it deems prices to be high enough to support its project or budget, it sells absolute price hedges. It will have the “slope” profit to add to the absolute price hedge to effectively achieve a hedge at a high price in a contango market.

The Mechanics of Buying and Selling the Slope of the Curve

The secret of this strategy is to get the timing right. Not only the time at which the traders execute the hedges, which is always a bit of a lottery given the unpredictable nature of prices, but the timing of the closing of positions to coincide with the time that the physical production being hedged is priced under the producer’s physical sales contract.

For example, say the producer has a physical sales contract that sets the price at the average of the published Dated Brent prices over each month of 2017. The producer will not know the price at which it sells its physical oil until the end of each delivery month in 2017. What price level an individual company finds acceptable -$40? $50? $60? – will depend on its price assumption for planning purposes and/or the cost structure of the asset it is hedging.  It may wish to ensure that it sells its oil in 2017 at, say, not less than $60/bbl, so hopes to hedge its oil for delivery in 2017 at ≮$60/bbl and it wants to do this before the end of the year, i.e. before end December 2016.

If the absolute level of the price curve increases before the year end, then there is a good chance that the slope of the curve will move from from contango to backwardation. There is no law that dictates that there will always be backwardation when absolute prices are high and contango when they are low, but over time I have observed this frequently to be the case.

If the front end of the forward curve has moved up to, say $60/bbl, the producer will want to hedge the absolute price to fulfil the original objective of ensuring that it sells its oil in 2017 at not less than $60/bbl. But if the prompt price of oil for delivery in January 2017 has shot up to $60/bbl, then chances are the market will have moved into backwardation, so a $60/bbl hedge absolute average sales price for the whole of 2017 may not be achievable.

Is this a Hedge?

The big risk is that absolute prices do not recover and the slope of the curve does not move from contango to backwardation. In which case the producer will either breakeven or make a loss on its slope of the curve hedge swap and will never get the opportunity to place its absolute price hedge. This is a real risk of a financial loss and there is no offsetting gain on the physical sales contract, which is what you would expect to see when hedging.

A loss on a slope hedge taken in isolation could be easily misconstrued as a speculative punt that went wrong. So any producers planning a two-step hedge of this nature had better have a well-informed management and shareholders on-board with the strategy before they set out.

Whether this activity would qualify for hedge accounting treatment or would be recognised as a hedge within the meaning of EMIR regulation [click here for an explanation of EMIR]  is difficult to say, but I expect that buying a spread swap that loses money could be challenged as a speculative adventure, particularly if the deal made a financial loss. The producer would be losing on both sides of an apparent hedge.

Hedging the slope of the curve may be easier to justify by having the producer buy a call option on the spread swap rather than buying the spread swap itself. Such options exist and are traded in the OTC market. So a producer could buy an option to buy the 2H2016/2017 spread swap at a strike spread of, say, -$3/bbl.

Does that mean that a producer with a mandate to hedge, but not to speculate, should not enter into outright spread swaps, but should only buy spread options? Perhaps. No market activity should ever be undertaken without an analysis of the company’s risk profile, risk appetite and market price view.

If a trader is in doubt about whether a particular deal is permissible under its mandate, chances are what they are about to do was never considered by the board when it issued delegated authorities. It is never a good policy to take the board or shareholders by surprise. A bit of spadework explaining the strategy upfront can avoid a lot of grief later on, including the necessity of hiring me, or someone like me, as an expert witness in a court case.

Knowing what the company wants to achieve with its hedges is considerably more than half the battle in tailoring an appropriate and successful hedging package. The rest is just mechanics. But it is in the mechanics that companies often trip up, usually by under-estimating the deep pockets needed to meet margin calls or by failing to get buy-in by stakeholders to the strategy in advance.

Small producers who are wary of getting involved directly in the market and worry about the chairman having to report “hedge losses” to shareholders have a much simpler route to market:   build a range of pricing mechanisms into the physical sales contracts themselves. When selling to major oil companies or to the large trading houses it is a simple matter to build all the optionality that a producer wants into the physical contract price clause, without going near the futures or OTC markets.

But if the producer wants to get fancier and have the option to lock in the absolute price, A, in the sales contract at, say, $40/bbl even if the market price falls below this level, this can be written into the physical contract. Similarly, if the producer wants the option to lock in contango, T, this too can be achieved in the physical sales contract.  If the producer knows what it wants it is a simple matter for certain categories of buyer to provide it: whatever the price clause says, either plain vanilla or choc-full of options, the buyer will in all likelihood be hedging it anyway, and it matters very little which price formula it is hedging.

It should be clear that writing optionality into a physical sales contract is not a free lunch. Trigger pricing is typically provided for free, but including puts and calls in the physical contract price structure will involve the same cost as if the options were being purchased separately in the OTC market.

The benefit is that it can isolate the producer from messy market mechanics and margining issues and it side-steps some of the accounting and reporting issues with which small producers are typically ill-equipped to deal. It may even avoid the necessity of entering into a weighty International Swaps and Derivatives Authority (ISDA) contract. From a management perspective it means that, while the company may have an opportunity cost if it structures its physical oil price clause unwisely, it will not have a separate, reportable financial outflow from hedging.  Whether that is a good thing or a bad thing depends on the company and the quality of the information it provides to its shareholders.

The pitfall to avoid is whether a complex price clause in a physical contract will be recognised by the taxation authorities or the National Oil Company dealing with the producer’s exploration and development cost recovery and profit sharing. But that will be the subject of another blog.